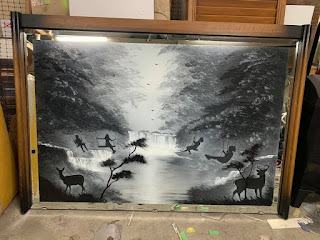 Born n raised in Cleveland Ohio, constantly adapting to change and overcoming life’s challenges likely had something to do with why he became the artist he has become.

He was always artistic, even as a child he enjoyed drawing and had hoped to one day become a cartoonist for Disney. Any opportunity that he had to show some sort of artistic expression, he took it.

One fateful day, while lost in the dark hole that is YouTube, he came across a video of a man spray painting on the side of the street in New York City, then another recorded in Vegas, then another in Mexico. What fascinated him most about this art form was the efficiency that he observed. He watched as street artists created masterpieces that looked as though they should have taken hours to create, only these works of art were crafted, dried, and sold in a matter of minutes! He just knew he would have to give it a try. And like many things found on YouTube, he wondered if this was as easy as it looked…

A few cans of paint and some poster board were the essential tools needed to create his first spray painting. A space scene. His wife’s reaction was a moment that solidified his interest and passion for the art. She thought he had ordered the pieces online and might be acting as though he painted them, but the fresh scent of the paint fumes in the garage validated his truth. These were created by a new spray paint artist. That night, VanJoe was born and given his name by his wife as a nod to the great Van Goh.

Years later, via farmers market, artist pop up in-the-park, online networking, and word of mouth, there would be hundreds of custom paintings created and sold all over the country.

Inspired by the greats like UK legends Banksy and Le’Rat, Mexico’s Porfirio Jiminez, Serbian spray painter Skech, as well as Mike Turner, Markus Fussell, and Tyron Webb from the United States, Joe pulled techniques and pro-tips from each artist to create his own undeniable style. 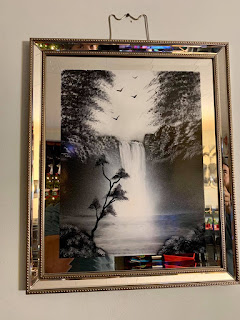 To set himself apart from others, he chose to paint not only on poster board and canvas but on mirrors as well. Specifically, painting on intricately designed, oddly shaped, or embossed mirrors to give the edge of each piece its own unique frame. Because art on a mirror can never be captured in its true beauty. A photo never moves, and a video will never do the piece justice. To see one of these magical worlds in person is to really see a world unlike any other. Moving, engaging, vibrant, and captivating.

VanJoe’s pieces range wildly to suit the desires of anyone wishing to have their own unique spray-painted art. Each piece unique and unlike any other.  If you would like your own one-of-a-kind spray-painted work of art, check out VanJoe on most social media platforms, namely Instagram and Facebook.