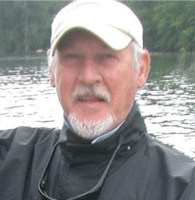 Mike Barkyoumb was raised in St. Albans and has been called a man of many talents. Mike works with wood making everything from nick-naks to a log cabin. His other passion is making music by playing percussion instruments with fellow band members and open mic at Bayside in St. Albans Bay.

His artistic career started in high school where he would play around with sketches but later in life, he found it didn't satisfy his artistic needs. Suddenly, sitting on a porch and sipping his morning coffee he noticed the scene in front of him would make a nice painting. So he dug out the kid's watercolor paints and voila this started his painting in earnest and has been painting seriously for over 25 years.

He has no formal educational training but has taken art courses, watched countless videos, and has a sizable library of art books to fuel his knowledge.

Mike's media of preference is watercolor. He loves how the white of the paper can become either translucent or opaque. He deals mostly with marine landscapes and architectural subjects. But, he also is known for his greeting and Christmas cards. Mike also dabbles in acrylic which is a new venture for him. He likes how these paintings can be loose and very creative.

Mike has gathered a large collection of paintings through the years. He usually gives them as gifts, donated a couple to the Swanton Library, and does sell them during his annual sojourn to the Wooden Boat School in Maine which is a primary source for his marine landscapes.
Mike's latest artistic passion is pencil sketches using a few artist pencils and on occasion colored pencils to add drama to the sketches. What he likes best about the pencil sketches is he is doing subject matter he never dreamed of doing in watercolors!

His motto is “Don't be afraid, it's only paper or canvas so Be Happy – Make Art”